Paul Cezanne was born in Aix-en-Provence in 1829 and has become known as the bridge between 19th century Impressionism and 20th century Cubism.  Cezanne commissioned a studio/workshop to be built outside of town, on top of a hill over-looking the countryside he loved and had immortalized in his paintings. The studio and workshop, built in 1903 at the end of his career, still stands as a museum and is open for tours. 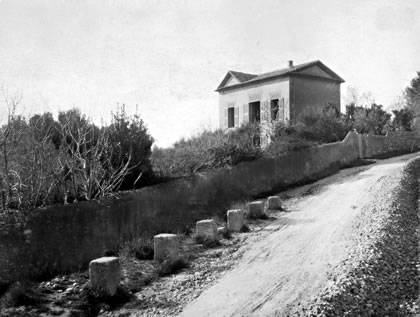 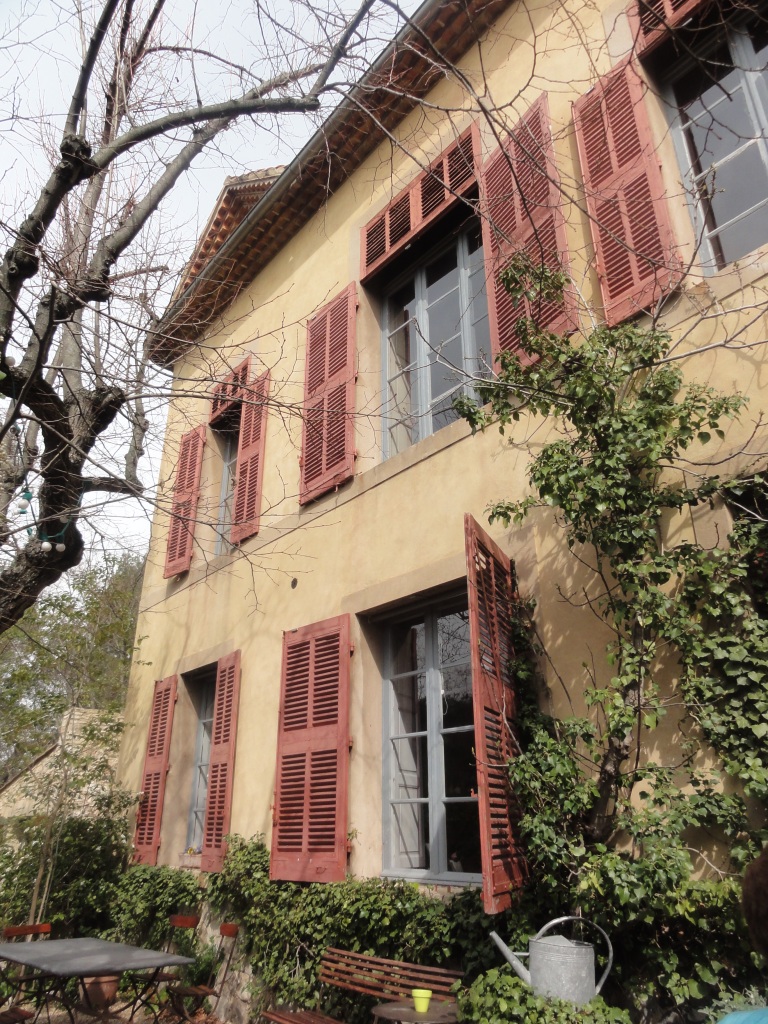 The tour of the workshop itself is done by authorized guides, and Philip was not supposed to talk. Our guide was sensible, however, and allowed him to help her out with translations when she couldn’t express herself well in English.

The studio is full of objects that are easily recognizable from Cezanne’s works.

Artifacts appear to be just as Cezanne left them, including his tall easels and ladders used for creating large paintings.

The photos in the section are from the Cezanne Atelier website. We were not allowed to take photos inside the workshop, but we took lots in other places.

Our guide was the epitome of the classic French “woman of a certain age.”

This is clever way to display photographs and memorabilia.

We all gathered on the steps to try to get a “family portrait.” It almost worked… 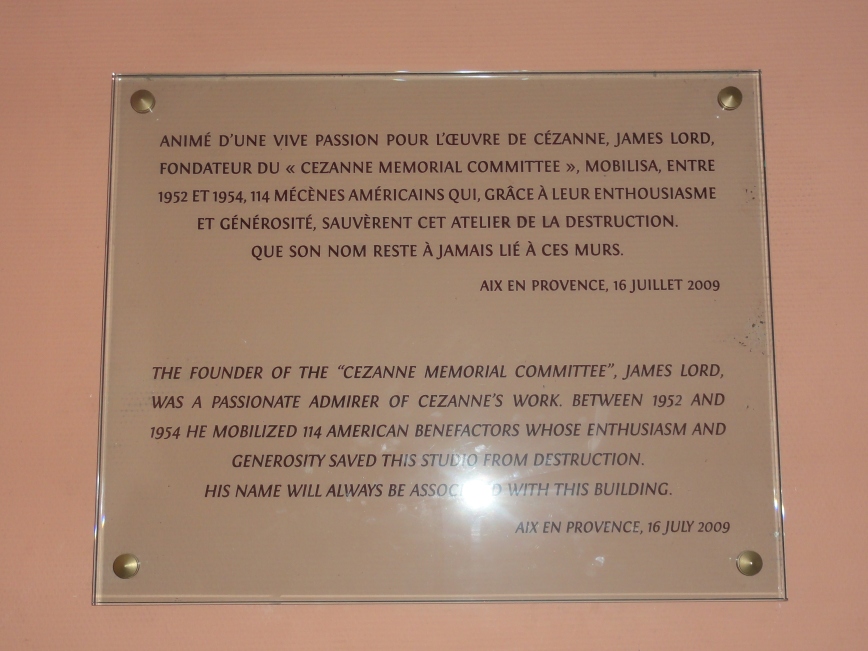 The studio was saved by a group of American benefactors. 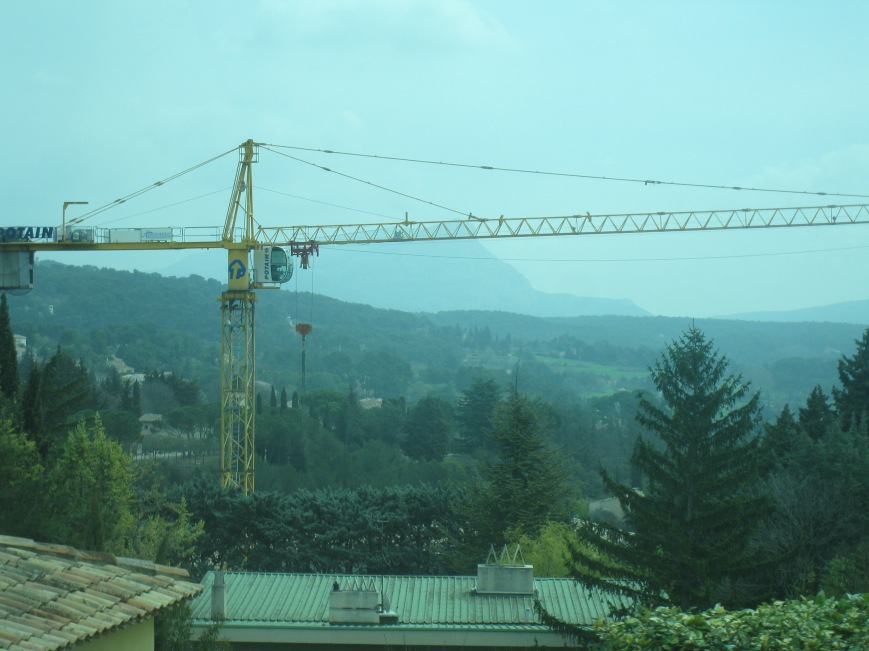 Bernard drove us up to the top of the hill where Cezanne went to paint Mont Sainte-Victoire. Modern life intruded.

We finally got a hazy photo. 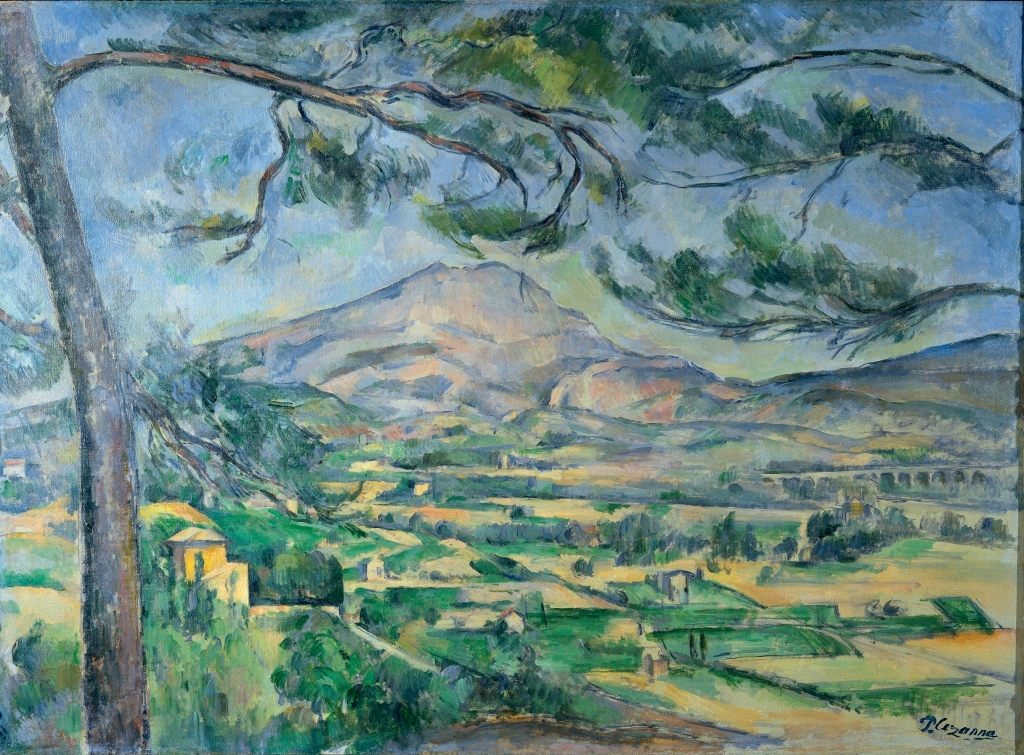 This is what Cezanne saw — we didn’t have quite the same viewpoint that day.

You may have figured out that we are still on the morning of Day Two, and we’ve already sorted through hundreds of photos. France is beautiful and photo-worthy pretty much everywhere you turn. Stay tuned!

NEXT STOP: THE ROAD TO PUYLOUBIER AND THE RESTAURANT DES SARMENTS.

Our first official dinner in France was at the restaurant on the ground floor of our hotel. 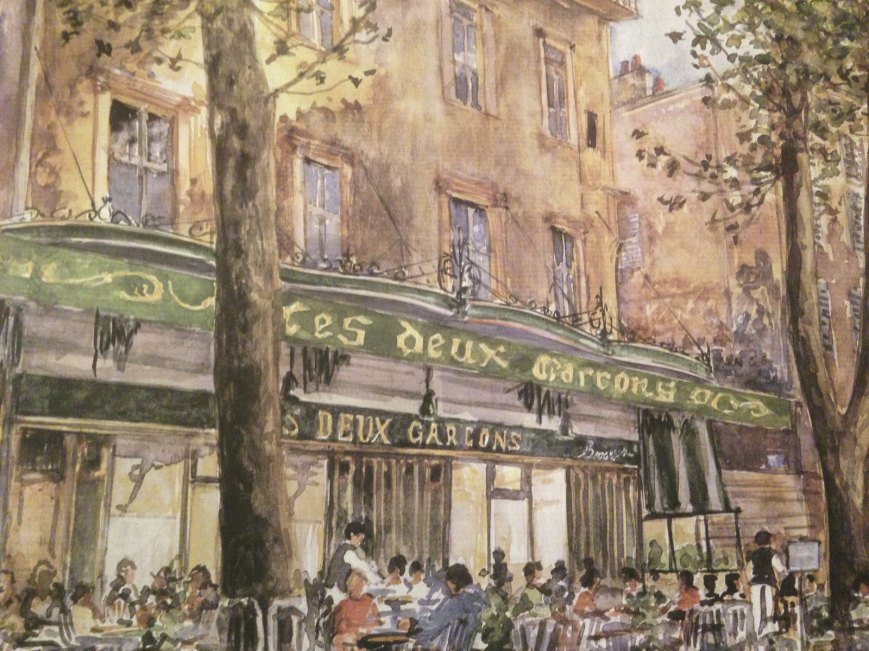 After being seated at a long table in the glassed-in section of the restaurant, we discovered that we were sitting in what might be an enclosed smoking section. Thankfully, the smokers stayed outside at the cafe tables on the sidewalk, and most of the smoke stayed out there, too. 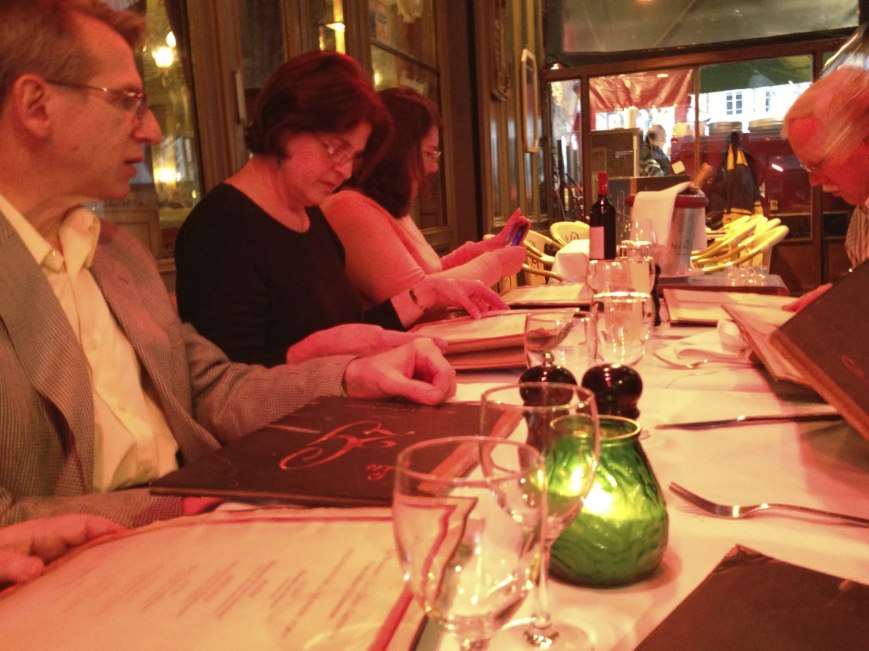 We started by perusing the menu and choosing our drinks to start our meal. The linked menus give you an idea of what we had available. 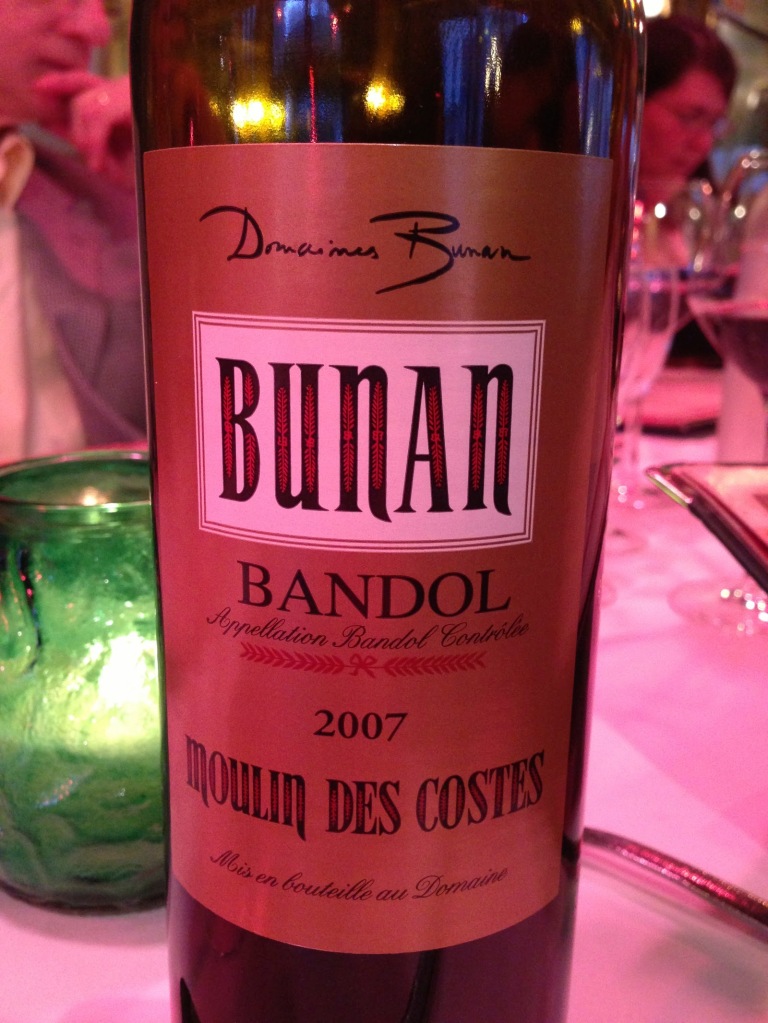 We started with a local wine from Provence. 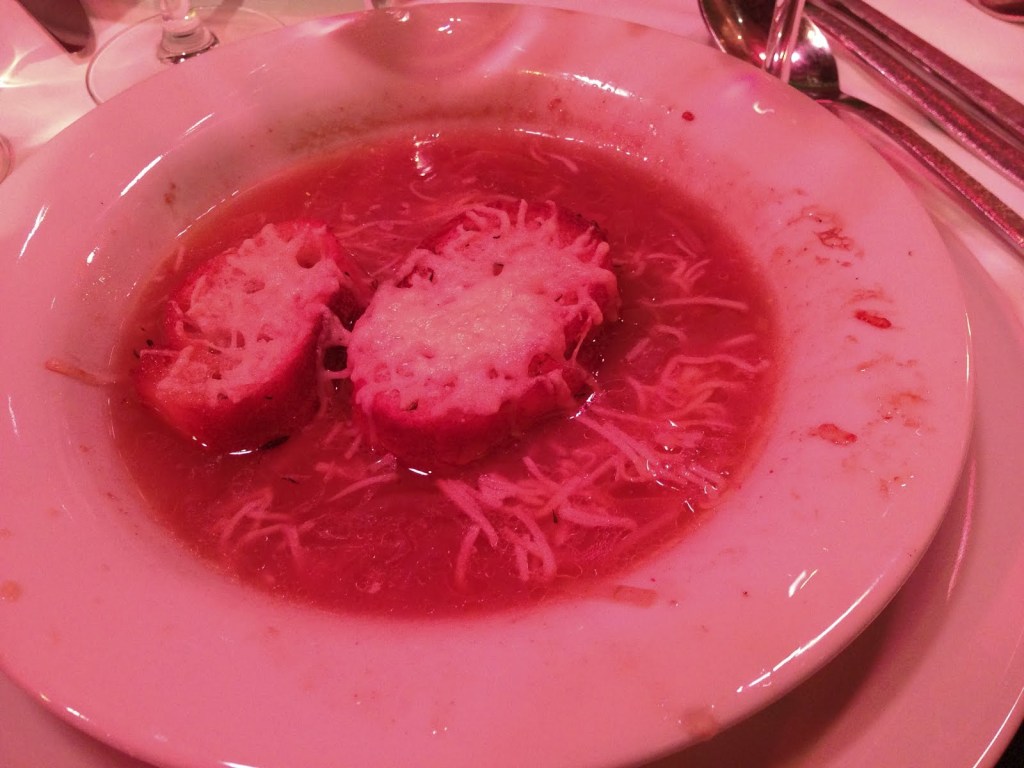 We had to try the French Onion Soup!

Jennie was excited to sample four different types of oysters.

Suzanne went for the lox plate.

I’m not sure who ordered the beef, but yes, they do serve fried potatoes with meals in France, and not just to Americans.

Terri had this fishy thing, which she claimed was very good. Update: Terri said it was Jon and he liked it.

Somebody HAD to order desserts — we were in France, after all — so we shared these delectable goodies.

Fodors says the food is not memorable at the Brasserie Les Deux Garçons, but for tired and hungry travelers, it served us well for our first night in France!

After an early, hearty breakfast at Les Deux Garçons (“the most famous brasserie in Aix. Built in 1792, it has been frequented by the likes of Paul Cézanne, Émile Zola and Ernest Hemingway”), Philip met us with a cheerful walk about Aix.

We started our morning with a visit to the nearby Marché Place Richelme, a local producers’ market on Place Richelme near the city hall, which is open daily 9:00AM – 12:30PM. Jennie blogged about our visit to the market on her blog, The Seasoned Dish. You can see her story by clicking here.

This market was in the plaza in front of l’Hotel de Ville (town hall).

Leaving the market, we all had to stop and take a photo of this coffee shop with a clever name. 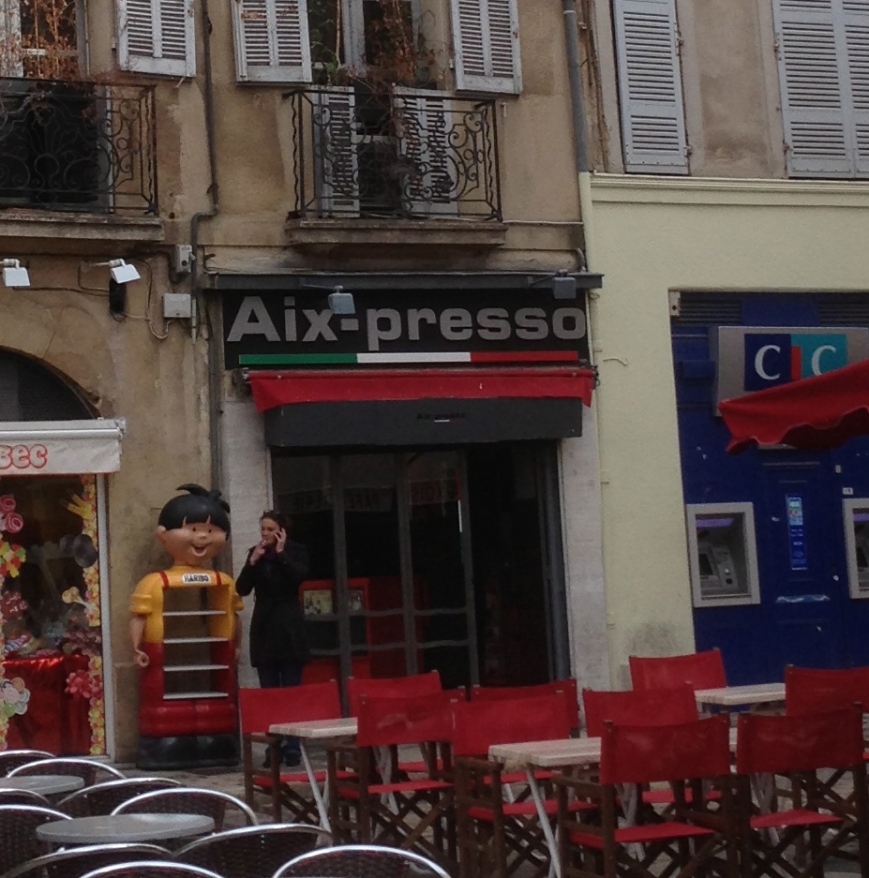 We visited the Cathedral of the Holy Saviour. 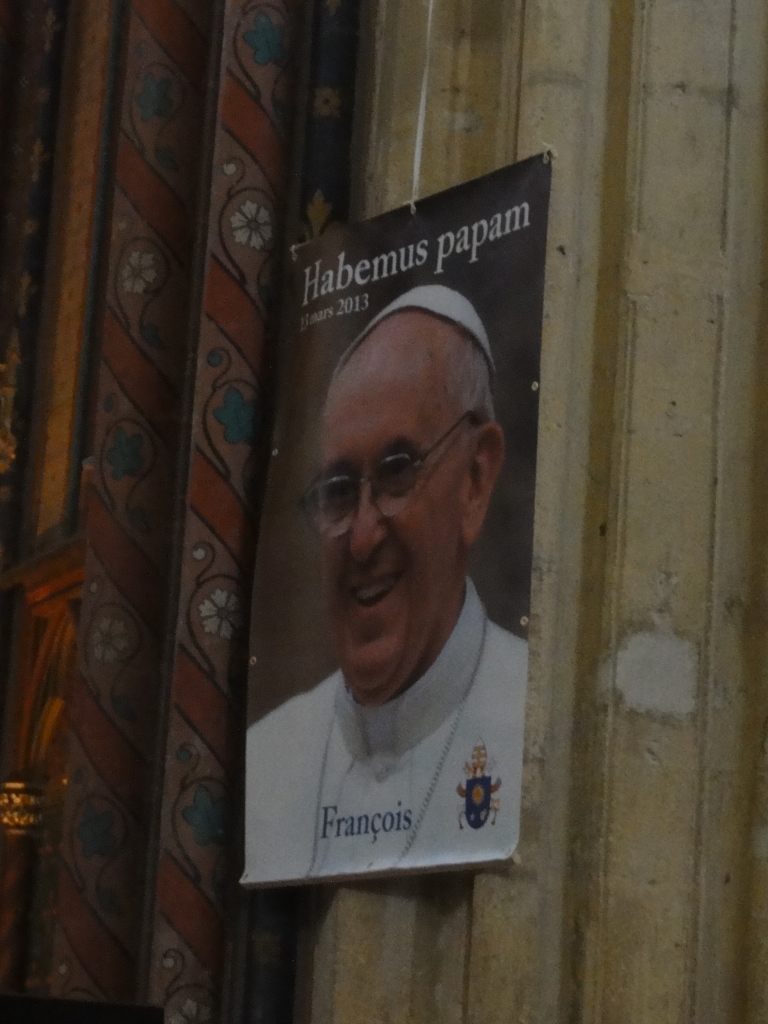 Colloquially translated, this poster says, “We haz a Pope.”

These little markers are in the sidewalks all around Aix; some point out key sites from Cezanne’s life…

… and some tell dogs where to go.

The streets are flushed out in the mornings and dog refuse is supposed to be in the gutter.

Some other lovely objects from our walk around Aix: 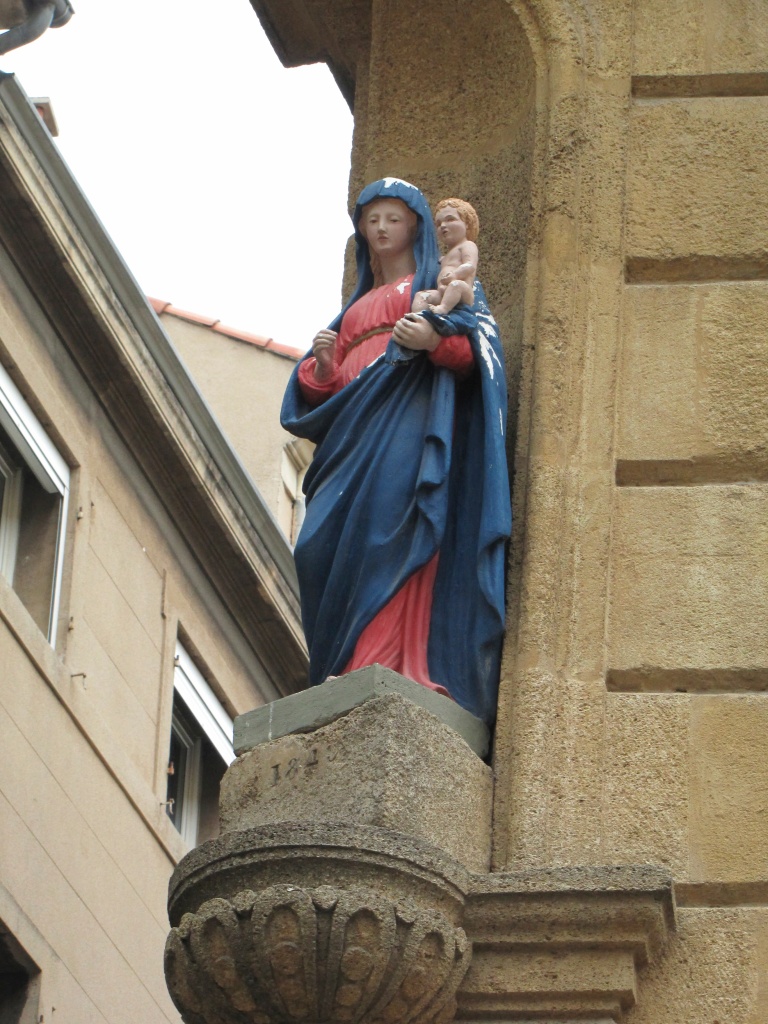 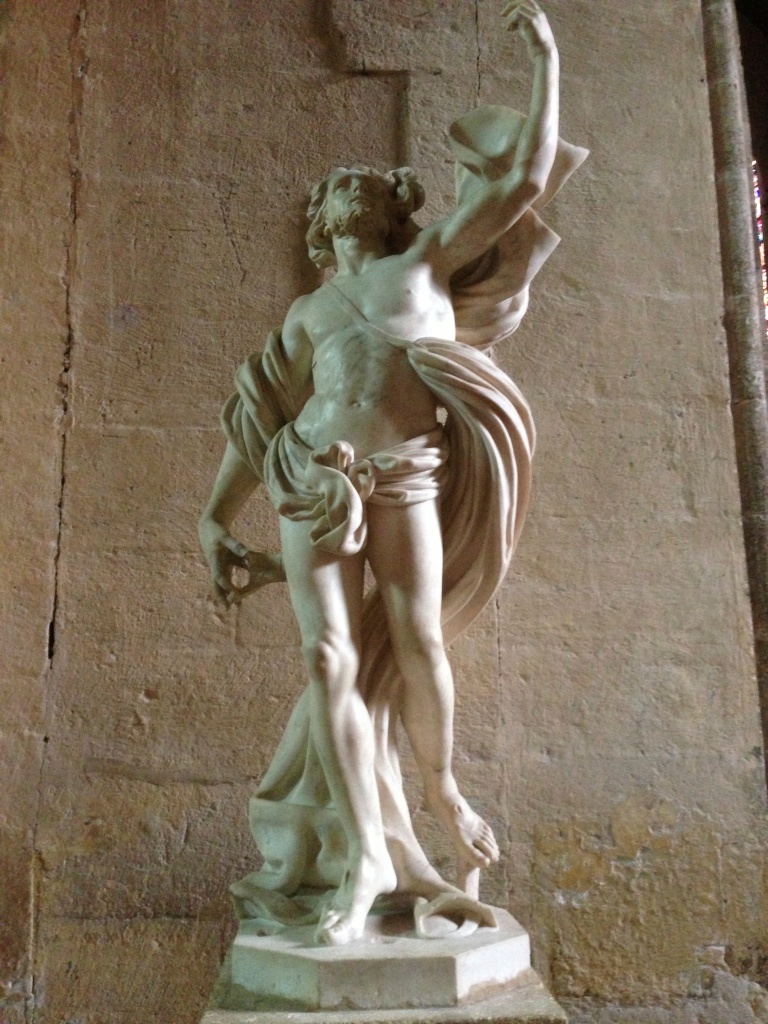 Our hotel was just a block away from this huge fountain in “La Rotonde” (roundabout). 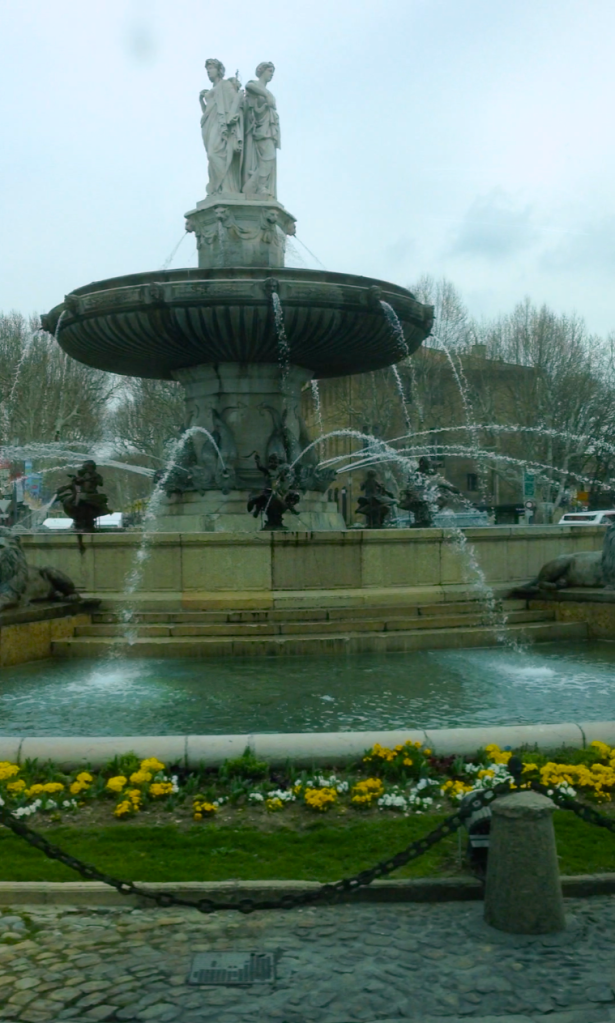 After two days of travel and sightseeing, we arrived in Aix-en-Provence, our base camp for two nights. We were staying at a lovely hotel right on the main square of Aix — seems fabulous, right? Unfortunately, the first thing we had to do was unload all of our suitcases and carry-ons off the bus and drag them down two blocks of the oh-so-fashionable Cours Mirabeau, in full view of all the beautiful people sitting outside at the sidewalk cafe tables. 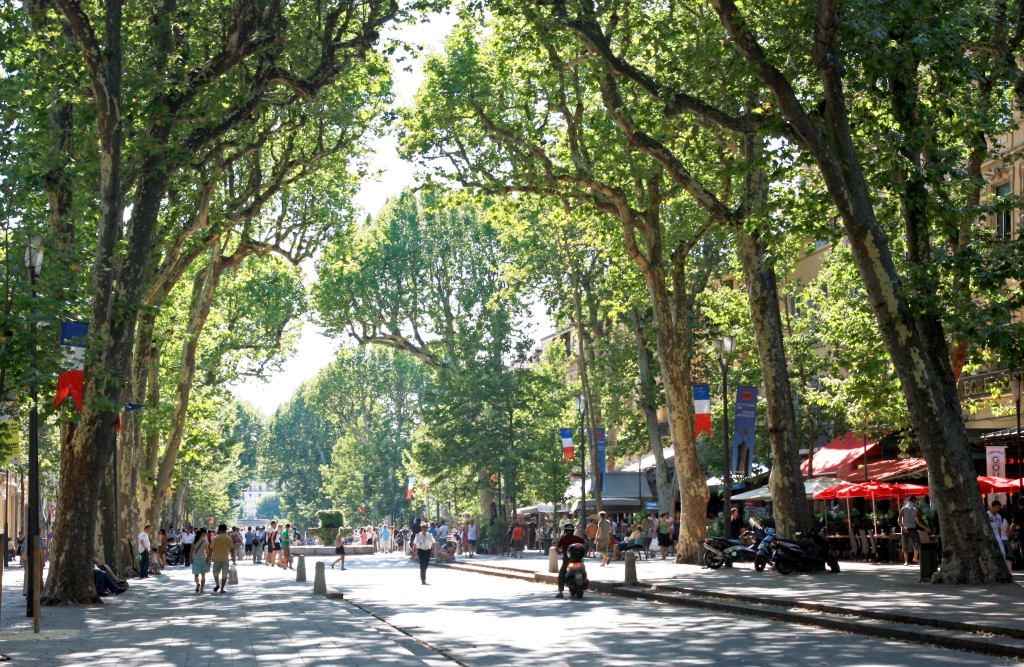 Although this photo was taken later in the season than our early April trip, it was a beautiful day and the cafes were full of beautiful people watching the tourists being tourists.

Fortunately, the story quickly got better. We found the hidden entrance to the Hotel de Gantes… 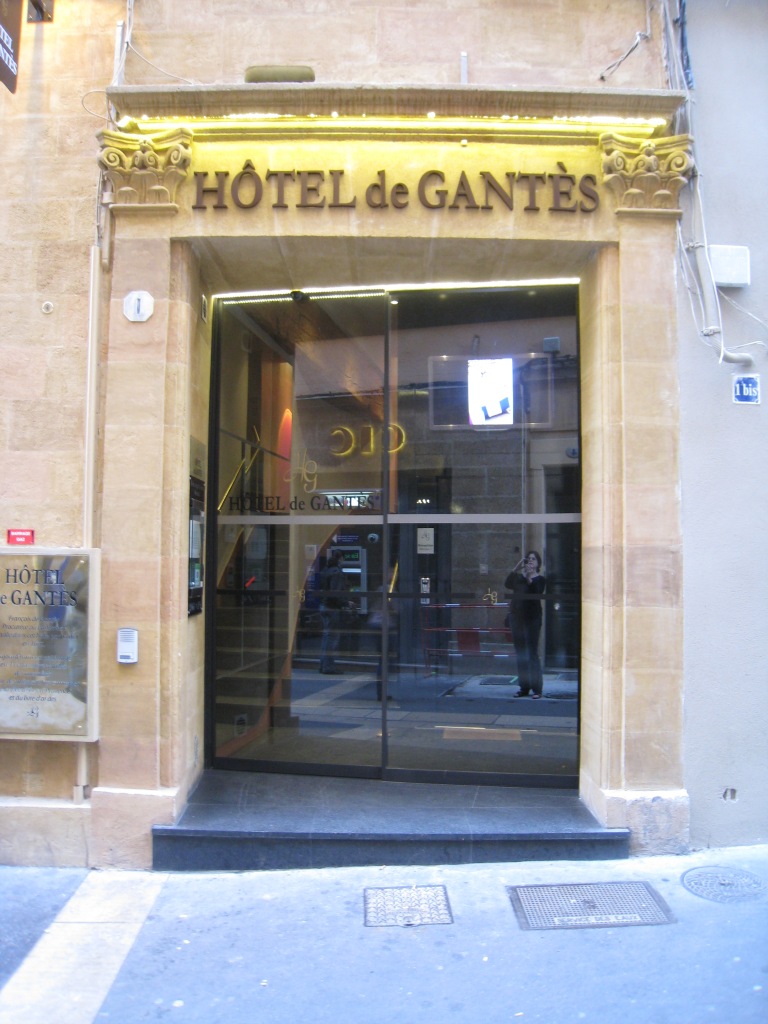 … and were checked in and ushered to our beautiful and spacious Aix-en-Provence-themed rooms. Each room is decorated to represent an important figure in Aix history or an artistic or literary figure who frequented the restaurant at the street level of the hotel — the Brasserie Les Deux Garçons.

Tom and Jennie stayed in the Rene Roi bedroom, with its funky king chair and canopied bed. 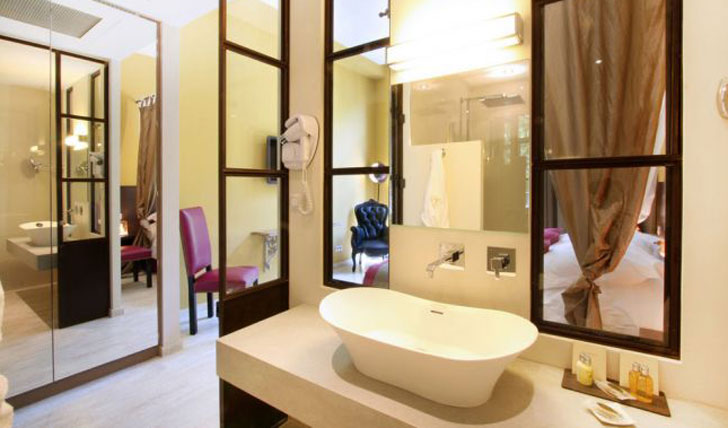 The bathroom in the Rene Roi bedroom. Yes, those are glass windows and doors.

The Brasserie Les Deux Garçons has been an Aix landmark for many years.

Our tour included continental breakfast in the brasserie, surrounded by the elegant gold-ivory style Consulate decor, which dates from the restaurant’s founding in 1792.

Behind the menu, the two real brothers are hiding. 🙂 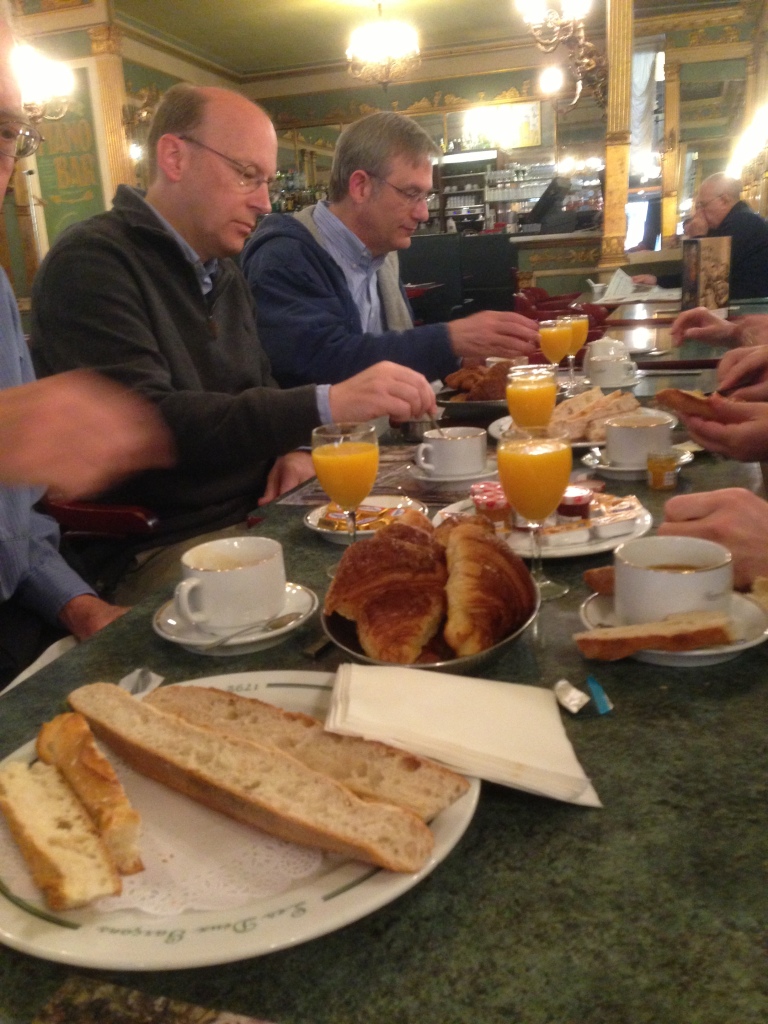 It was easy to convince Jennie to get an omelette to go with the pastries.

NEXT STOP: WALKING TOUR OF AIX-EN-PROVENCE